Nan came home from church last week with a big bowl of plums. “I bought you a present” she said. People often bring things like that from their garden when they have excess and Nan knows how I love home grown. I was not however, entirely sure what I’d do with them. One of my followers on facebook suggested I make chai spiced plum jam. I have several jam plans this year, and didn’t think I’d have capacity for plum as well, but I did like the idea of adding spice. Pop likes ginger, so I decided to make this spiced plum crumble with some fresh ginger with the plums; and some cinnamon and allspice in the crumble. I think it was delicious. 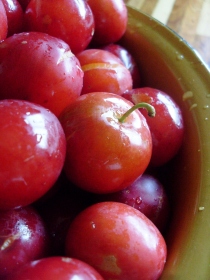 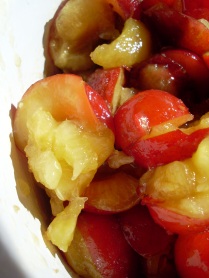 Roughly chop the plums and remove the pits. Add them to the baking dish with the grated ginger and brown sugar, mix roughly.

Place the sugar butter and flour in a mixing bowl and rub the ingredients together with your fingers. When the mixture is like breadcrumbs, but with some large lumps, add the cinnamon, allspice and oats. Mix to combine and spread atop the plums.

Serve with ice cream and or cream.

This entry was posted in Dessert and tagged British food, fruit. Bookmark the permalink.