This version of Brittany’s buckwheat crepes is gluten free and vegan. I used the beautiful wholemeal buckwheat flour from Bob’s Red Mill. It’s amazing. The flavour is rich and very nutty, the colour is incredible and the texture is very fine. I couldn’t recommend it more highly.

I did a bunch of research for this recipe. There are versions that are just like wheaten crepes, with milk and eggs. But I made these for a friend of mine who is vegan, so I was keen on the very simple recipes based on water, buckwheat flour and salt. It seems some magic happens with the buckwheat and water to hold the batter together. The trick is to rest the batter for at least a few hours. I also experimented fermenting the batter a little. That was VERY successful. When the batter bubbled to double its size, the crepes had a lovely soft and light texture.

The traditional filling for a galette is Swiss cheese, ham and egg. But I came up with a vegan combination to hit the spot: mashed cannellini beans provide the creaminess and contrast with the rich buckwheat, and a little spinach sautéed with garlic provides texture and freshness.

Combine all the ingredients in a bowl. Beat them with a whisk until a ribbon of batter remains in the bowl when you move the whisk. You may need to add more water. Set the batter aside for a few hours.

If you would like, leave the batter out to ferment for up to 12 hours or until it doubles in volume then mix the batter to remove the bubbles.

When you’re ready to cook the galette, preheat a large frying pan on medium high heat. Grease the pan with a little olive oil. With a ladle or similar, scoop up half a cup of batter and pour it into the pan in a circular motion, gently shifting the top of the batter to spread it evenly across the pan (you don’t want to shift the batter on the bottom).

When the batter has set all the way to the top, add your choice of filling to the middle of the galette, giving it time to heat through, melt or cook as appropriate before folding the sides in to form a square.

Add the drained beans to a small pan and cover with water. Add the celery salt and bring to the boil. Cook the beans til they are tender enough to squash with a spatula. Roughly mash them. You want the beans to be thick and scoopable, like dolloping cream.

Meanwhile, add the olive oil to a small saucepan. Roughly chop the garlic and cook it in the oil on a low heat, with the lid on the pan. When it smells sweet and fragrant, add the baby spinach and brandy. Cook till the spinach is just wilted.

Cook the galette according to the instructions above. When the batter is set, add a generous scoop of mashed beans, then a pile of baby spinach.

When the galette is sufficiently cooked, the edges should lift from the pan. Fold the edges of the galette over to form a square, cook the bottom a little longer. Lift the galette onto a serving plate and enjoy. You can serve it with a green salad if you like.

Separate the egg white from the yolk. When the galette is set, spread over the egg white. Allow it to cook a little before adding a slice of cheese to each end of the crepe. Gently place the yolk in the middle. When the cheese is nearly melted add the ham to either side of the yolk and fold the edges of the galette in to form a square. Cook a little longer and serve. 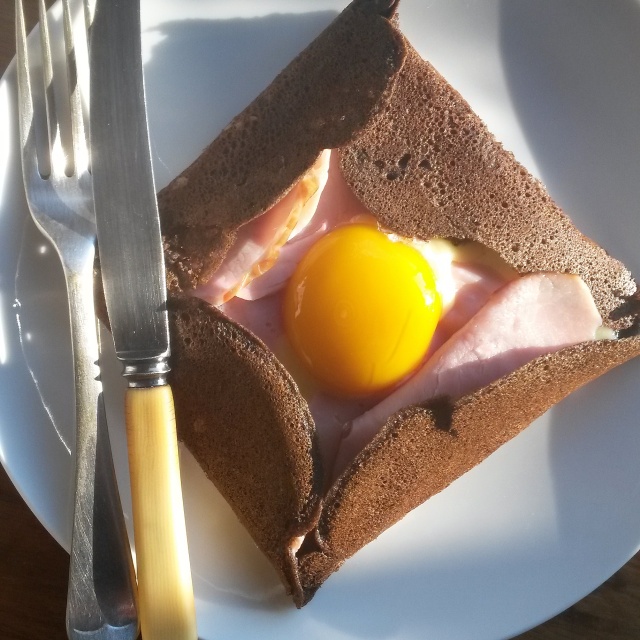