When I was visiting my grandparents in Burnie over the holidays, we called in on my great Uncle Lyal and his lovely wife Heather. I like them both a lot. The Rubock family span the whole political spectrum and Lyal falls at the left end of that spectrum. For some reason, they all got on the memory train and were relaying great stories of shenanigans they’d been up to when they travelled and worked together selling encyclopaedias. It was great fun, and a great revelation! Lyal pulled out the only album he had of old family photos and dared me to call my somewhat gruff great Uncle Bill, ‘Billy’ next time I saw him, as their dear mother had done before she died. I dared not.

For several generations, the Rubocks were bakers. I take great pride in that fact, and relish hearing stories of the bakery. Everyone always said that my Great Pop was the best baker, but the flour had wreacked havoc with his lungs, so he ended up just doing the deliveries. Uncle David was the one in Nan’s generation who continued the baking tradition. Uncle Lyal did deliveries too, but he told me about how he used to cook the crumpets on the hotplate, with the metal rings building up in rows on the spatula. Apparently Auntie Joy used to love to eat them fresh off the hot plate, dunked in sugar that sounds terrible to me. But Uncle Lyal said he thought they were the best crumpets he’s ever eaten. I liked the sound of that and immediately decided to track down the recipe. 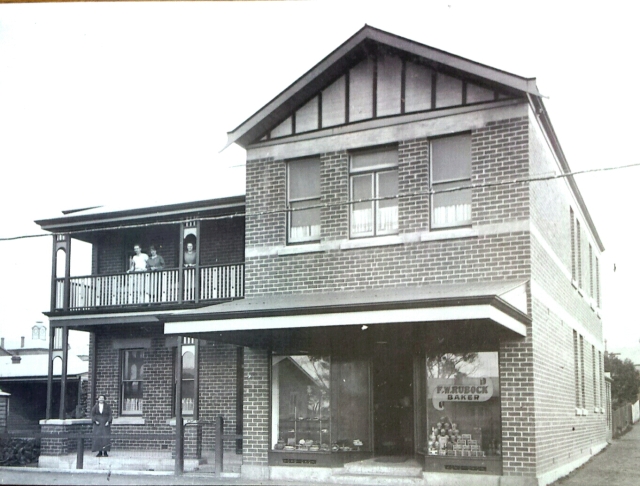 Uncle David remembered the recipe for me, but having always made it in vast quantities he gave it to me in the bakers’ way, in percentages of the flour by weight. They were all very insistent that they’d always been made with biscuit flour, not the strong flour used for bread. For such a simple recipe, in which the flour mattered so much, I couldn’t resist calling into the Callington Mill in Oatlands to buy some freshly milled, locally grown flour. As he suggested, I’ve played around enough to be confident in this recipe for a small batch, produced by volume. The only thing you’ll have trouble weighing will be the fresh yeast. I calculate mine by dividing up the block of yeast based on the weight given on its label. 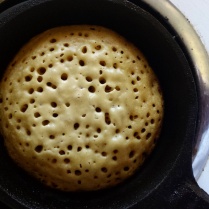 The only other tricky thing is finding a suitable ring to use to hold the batter in the pan. You want something a bit bigger than an egg ring, though that would do if it really was all you had. I had thought to use cookie cutters, but then I remembered I have a tiny cast iron skillet that I use to bake small wheels of cheese. It came from Bruny Island Cheese Co who sell it as an ‘Otto Pan.’ It is absolutely perfect.

Place the yeast and sugar in a large bowl. Add a little of the water whisking to dissolve the yeast. Set aside for about 10 minutes to allow the yeast to activate.

Add the remaining water to the bowl and whisk in the flour and oil. When it’s well mixed whisk in the bicarb and salt. Cover and leave till it doubles in size. This may be an hour or so, depending on the temperature.

As is the trick with cooking in a cast iron pan, make it hot before adding your food. The pan wants to be hot enough to smoke when add a tiny bit of oil to coat the bottom and sides of the pan, then pour in about half a cup of batter. You may need to experiment with the volume of batter because you want it as thick as possible, but you need it to be able to cook through most of the way on one side, leaving good sized bubbles on top. I aim to keep my batter less than a centimeter thick when I pour it in the pan. Then I turn the heat down very low and let the crumpet cook gently. You will gradually see the characteristic bubbles develop on the surface. If you like, you can gently flip the crumpet to cook the top for a few seconds.

Remove the crumpet to a cooling rack and repeat with the remaining batter. Leave to rest overnight and toast in the morning. Serve with your desired toppings, but I’m a fan of butter and honey.

This entry was posted in Brunch, Morning or afternoon tea, Thoughts and tagged bread. Bookmark the permalink.